Diary of a Striker: Federica Gasbarro’s social challenge with iGreen 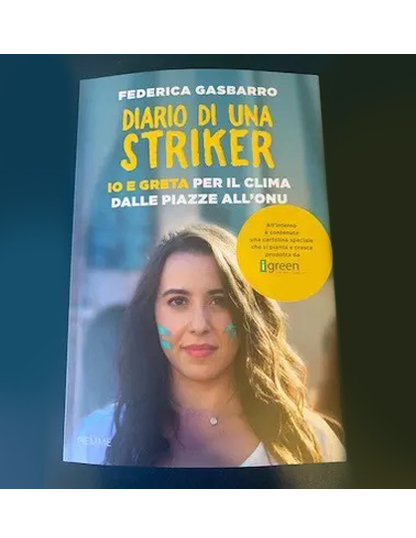 “I don’t want to tell my children that their mom just stood by and watched while something could still be done, and that all that what was left for them is an unlivable world.”
This is what pushed Federica Gasbarro, a university student from Rome, and little over 20 years of age, to join the Greta Thunberg’s Fridays For Future movement. Since then, she became one of the major Italian members of the movement, as well as the first activist to tell about the movement in a book, published by Piemme Editore in collaboration withiGreen.

From the greenest region in Europe to the activism against climate changes: let’s get to know Federica Gasbarro

Known, among other reasons, for being the only Italian participant at the New York Youth Summit, Federica Gasbarro was born in the Italian region Abruzzo – the only European region with two national parks – and then moved to Rome to study biology. She inherited her environmentalist conscience from her parents, who continued supporting her in her journey (her father is the photographer behind the cover picture of her book) when, two years ago, she discovers Greta Thunberg’s movement and decided to join the demonstrations in Rome becoming, in very little time, one of their main exponents.

The diary of Federica’s journey: one year as striker

Strike for future, This is what the banner held up by Greta Thunberg outside the Swedish Parliament says. And strikers are the activists of her movement against climate change, young individuals who, every Friday, demonstrate against global warming, slowly but surely gaining the support of more and more age groups.

Federica Gasbarro chose to tell about this experience in her book, Diario di una Striker (literally, Diary of a Striker). Her work is not only a narrative effort, it is also structured as a project of scientific dissemination, devolving all profits to Médecins Sans Frontières and Earth Alliance, the non-profit organization founded by Leonardo Di Caprio. In the book there is, however, no shortage of practical suggestions as well, such as the adoption of washable make-up pads, and an invitation to get involved, thanks to iGreen’s plantable paper.

The philosophy behind #seedsforclimate, the social challenge started by Federica Gasbarro and iGreen Gadgets, is that every plant, even the smallest, can contribute to the reduction of CO2. This is why each copy of Diario di una Striker comes with a plantable postcard, a postcard with seeds in in that just needs to be planted and watered. This way every reader will tangibly contribute to fight climate change./p>

To take part in the social challenge you just need to take a picture of yourself with a copy of Diario di una Striker while planting the plantable postcard, and posting it on Instagram tagging @federica_gasbarro with the hashtag #seedsforclimate. You just need a small windowsill to begin the challenge, and the best pictures will be reposted by Federica, who is eager to get organized to go and plant trees with her readers.

Eco Organizer Eco Organizer: the eco-sustainable pen holder for your desk! This pen and pencil holder is eco-friendly and comes with a compartment for your…

Here’s who has already believed in the iGreen Project